Environmental Vibrations is a child-friendly performance project that explores the human connection with nature. It features dancer Kira Radosevic moving to Tara Rajah’s improvisations on the cello followed by a family friendly visual art workshop. This project explores the idea of home. It relates the idea of the global movement of peoples to that of the migration of birds and encourages participants to reflect on the environment they call home through dance and music. The performance will bring together different sounds and movements that will represent the journey of leaving and arriving home. As the sounds of the cello express different cultural and natural realms, the dancer will interact with the participants in interpreting these musical expressions as movements. The musical improvisation takes as its point of departure the Malaysian folk tune Jinkli Nona. There will be a workshop* accompanying Environmental Vibrations titled Send a Postcard Home! It invites families and groups of friends to create a postcard and send it to a place that they consider home. They can send it to themselves in BC or to a friend or relative in another place that they consider home. The workshop is based on a watercolour process developed by Cherry Lu and Robin Lough. The performance and workshop will be integrated within a larger work by performance group Foolish Operations titled Moving, Resting, Nesting. This work involves participatory workshops and performances for families with young children, daycares or preschool groups. Environmental Vibrations and Moving, Resting, Nesting will be presented as a part of the grand opening of the new Port Coquitlam Community Centre on the ancestral and unceded territory of the kʷikʷəƛ̓əm (Kwikwetlem First Nation). THE ENVIRONMENTAL VIBRATIONS PERFORMANCE WILL RUN FROM 3:00PM - 3:15PM THE SEND A POSTCARD HOME! WORKSHOP WILL RUN FROM 4:00PM - 4:45PM MOVING, RESTING, NESTING EVENTS WILL TAKE PLACE THROUGHOUT THE DAY FROM 1:00PM - 5:30PM VENUE: THE PORT COQUITLAM COMMUNITY CENTRE LOCATED AT 2150 WILSON AVE.

Tara Rajah is a classically trained cellist with a practice that includes experimental music and community-engaged performance. Tara attained her BMus from the University of Victoria in 2019 under the tutelage of Pamela Highbaugh Aloni and the Lafayette String Quartet. She is currently a member of the Harmonia Chamber Orchestra in Vancouver and has a long-standing relationship with the performance group Foolish Operations with which she has worked on various community-engaged art projects. Tara was born in Kuching, Sarawak in East Malaysia and immigrated to Vancouver, BC in 2002 when she was 6 years old. Inspired by her journey and life in Canada, her event, Environmental Vibrations, explores the idea of home in the context of the global movement of peoples in terms of ideas about local culture and nature. In producing this event Tara will collaborate with Vancouver-based dancer Kira Radosevic. Kira Radosevic was born and raised in East Vancouver and trained locally at The Goh Ballet and Coastal City Ballet before moving to San Francisco in 2018 to complete a year at the LINES Ballet Training Program. She then was accepted to Modus Operandi Contemporary Dance Program and is now in her third year of training under the direction of Tiffany Tregarthen, David Raymond and Kate Franklin. As well as dance, Kira also practices visual art. She is currently collaborating on several multimedia projects in dance-film, collage, and music. This is Tara and Kira’s second collaboration this year after their most recent project with videographer Shopie Janus in the short dance film “Salty” that will debut at the F-O-R-M’s 2021 online festival. 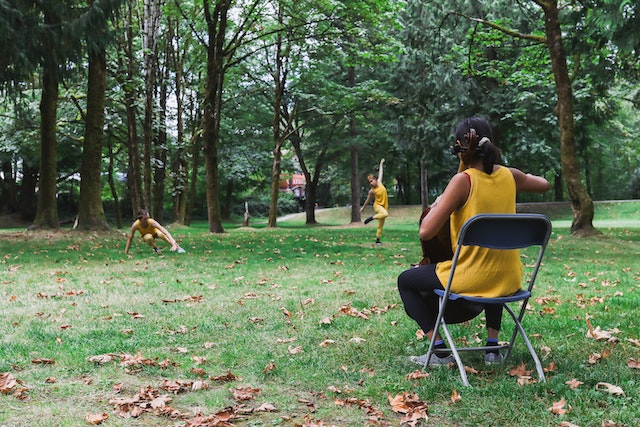 BC Culture Days Various, BC

Join our 2021 BC Culture Days Ambassadors in exploring various ways of reconnecting creatively with members of the community post pandemic. Activities will take place both in person and virtually, ranging from workshops, jam sessions, inter...